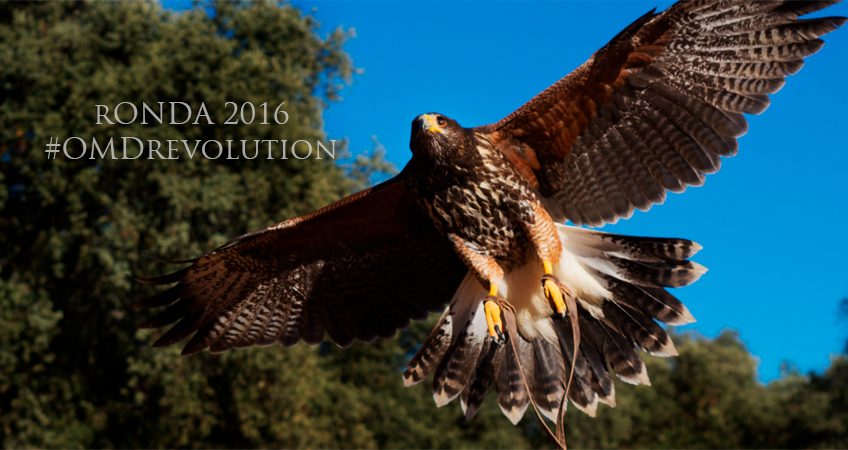 Not long time ago I was invited by Olympus (Bulgaria) to try the new OM-D E-M1 Mark II.

Of course I said yes right away because this event was combining 3 of my most favorite things in the world – trying new equipment, meeting new people and… Spain!

I had to fly to Malaga and from there the Olympus team picked me up with the other participants and drove us to Ronda.

Oh, I have so many things to share!
The trip was amazing and every part of it was special!

Once we ended up in the magical Reservatouro Ronda, we were split in 4 different groups and we were ready to start our test “drive”. Everything was really well prepared so that we can have the pleasure and time to take a really good look at the camera.
My group started with some lovely, gigantic birds and there was a professional wildlife photographer ready to share his experience and to help us if we need.
I was truly pleased with the results and the flexibility you have with this sort of camera. As a person who love to be carefree I really enjoyed how big this camera is. It really gives you the feeling you can carry it around whole day without gaining some extreme amount of muscle you did not wanted in the end of the day. And when I actually tried it, I was even more happy!

However, you know I’m a big birds lover, but shooting birds is not something I do for a living.
Fortunately the moment I thought of it we had to move forward with our tour.
This camera is made mostly for people capturing fast moments as sports and animals, so we went to shoot some horses and there was another professional, gorgeous lady shooting weddings for a living. She was very prepared with all her answers and soon after we showed up there the horses were running towards us and we had the chance to make some photographs of them in safe environment.

The most interesting part for me came right after this!
We had the chance to shoot corrida bulls!
I’ve always thought these are some reaaaally big, very fast and very angry animals, and I was right! The are huge! But if you are not pocking them or something they are rather calm and really, really  lazy creatures.

The camera did great, though the sun was crazy shining and there were many hot spots and some really dark shadows. The best part about it was that the camera is proofed really well, so we could literally lay down and stick the body and the pro-lens in the dirt so we can shoot through a big wall and be safe from these lazy giants. Something I’d never do with my own camera, because it will be its final photo shoot.
But come on, I’m shooting people, and it’s mostly in controlled environment, most of my clients don’t want to roll in the dirt with me, have no idea why.

I mentioned pro lenses and here is the time to share with you how amazed I was when I lost my AF-focus and had no idea how to turn it back on.
And Olympus surprised me again. All you have to do to go from MF to AF is to pull one of the rings on the lens. Soooooo, soooo easy!

After the bulls we had  a meeting with two young Swedish gentlemen – Samu Amunét and Janne Amunét dealing with video. They had the chance  the reveal us the secrets of OM-D E-M1 Mark II  video mode.

Honestly, the very first time I touched Olympus camera, a few years ago I had the unique opportunity to hold one of the sensors of these cameras in my hand, and I was really amazed by the way it moves and the way it takes out every shake of my hand. Surprisingly for me OM-D E-M1 Mark II is even better, I don’t know how, but the test showed it and there is nothing else I can tell about it, but to share the test video we did during our stay. I have to say that I shot the video on a trailer attached to an off-road car and it was crazy fast, the road was mostly rocks and we were shaking like crazy.
Big thumbs up for the person who came up with this idea for test! Hope nobody from the other groups fell off the car during this test 😐
I’m even gonna leave the original sound so you can listen to the vibrations of the trailer 😀

We spent plenty of time on the previous locations, so there was only one task left.
This camera is most famous with it’s 6O fps which is A LOT. And I really thought we checked this with the flying birds, it turned out I was wrong, because the last test was just about it.
There was a really good archer (thank God he was good! =)) shooting balloons full of colored water just for us!

So our lovely guide Michael Guthmann told us to try this amazing function, and the odd part about it is that your camera starts to shoot the moment you push half the button.
I’m a Canon user, so for me half the button usually means auto focusing, aaand guess what? In less than 3 seconds I ended up really surprised realizing my 32gb card soon will be full if I don’t get used to this new function very fast.

Once we were ready the archer started shooting and the first arrow hit the balloon that fast I was glad I had the images on my camera so that I can see what have happened.
The good thing about it is that you REALLY capture the moment of the moment of the moment. The crazy part comes when you have to go through all these photos.
Fortunately the 60fps is a feature you can use only when you need, so the problem is resolved.
I made this GIF just for you, there are 36 photos in it!

After this final test we had the opportunity to see some dancing horses, a show prepared by the really friendly and adorable staff of Reservatouro Ronda and then we had a really nice evening with the people from all the 4 groups all together.

I always love this part, because you get to know new people and that’s so fascinating!

The other invited photographers were also truly amazing one of them was Marcin Dobas photographer at National Geographic and another was Jakub Kaźmierczyk amazing food photographer, another one – Przemysław Jakubczyk – photographing cars and sports…. and so on and so on!
We were all very pleased with the new camera I must say!

Some people even asked me what would I do with camera like this as a Fashion and Advertising photographer, and I think this is a really good question!
It took me some time, but I found the answer. Why is that so, why do I needed some time for this? Because like I said this camera was made to capture a moment of movement. And yes, sometimes I need this, but it has to be connected to particular idea. And those ideas in my areas are not everyday ideas. So I had to think of a situation when I’m really gonna need this camera and no other else.
And now I’m prepared to answer. With an actual photograph, because there is nothing that will speak louder than that.
But that’s just a teaser…. You’ll have to stay on track, because really soon I’ll reveal my answer of this question  🙂

Verginiya Yancheva is a Fashion and Advertising Photographer

All works © Virginia Y 2019. Please do not reproduce without the expressed written consent of Virginia Y. DATA PRIVACY POLICY: I am in-line with the GDPR and Data Laws taking place on 25th May 2018. If you require any further information on my data policy please email: info@vyancheva.com